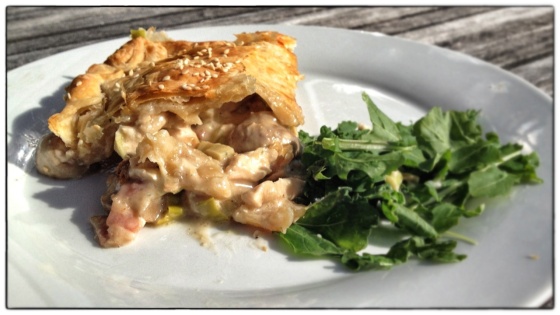 “Don’t ever change anything about this recipe” – The boyfriend, on eating this pie

Chicken is the ultimate pie-filling, yet it’s almost impossible to buy a good chicken pie. If the pastry’s not stodgy, the filling is niggardly:  white sauce with stringy bits of salty bird floating around in a lonely sort of way. Fortunately it’s so easy to make your own!

The secret to this chicken pie’s simplicity is to cheat. There’s nothing wrong with the pre-roasted birds sold at the supermarkets, nor with pre-rolled frozen pastry. Use both, and your biggest headache is going to be chunking your chicken without eating half of it. (My chickens always mysteriously lose both their legs and wings.)

While cooking this pie, it is recommended that you drink cider.

My dad made me take this photo because he thought it looked nice.

Pastry is a grown-up substitute for modelling clay 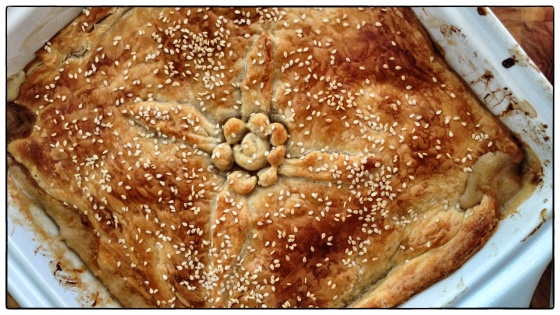 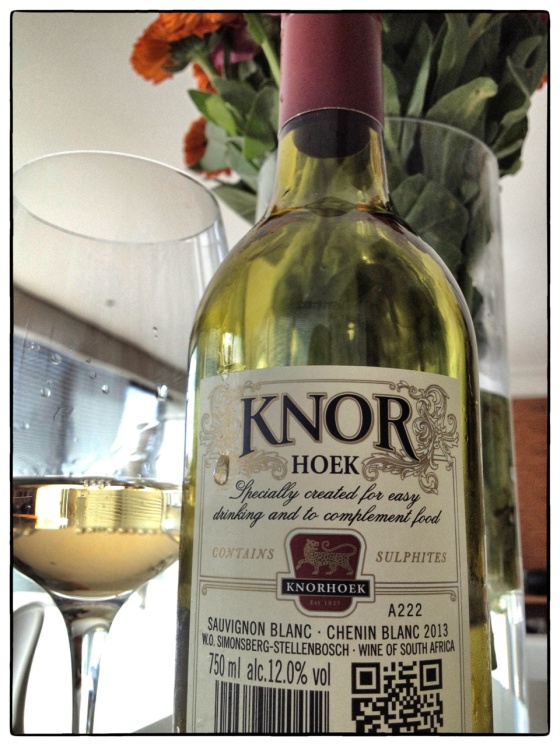 While it’s a great idea to drink cider (especially one as good as Windermere) while cooking this pie, eating it requires white wine – preferably the one you used in the pie (a lesson I learned from the Coq Au Vin). A Sauv Blanc-Chenin blend is just the right combination of crisp and fruity. #Happiness

Just what you want when it’s cold and dark outside.

I took my (slightly chewed) apple crumble with me to a dinner party last week, where we were served superb pistachio-nut soup topped with Turkish saffron, followed by a traditional French coq au vin, stewed for hours in a Le Creuset casserole, complete with shallots brought specially from France. My hosts had slaved for hours over these dishes, so I felt a little cheeky pulling out the humble crumble, but it seemed to go down rather well anyway.

Despite the exotic allure of the soup, I was put off by grim stories of spending hours shelling nuts so, although I asked my friend for both recipes, I only intended to try the coq au vin. And, of course, I planned to make it as easy on myself as possible. Good news: I succeeded.

Yes, there are a lot of them, but they’re very simple and you should have most of them in your kitchen already.

You need a fairly large frying pan to fit a whole chicken into. Remember to turn it over. The chicken, not the frying pan. 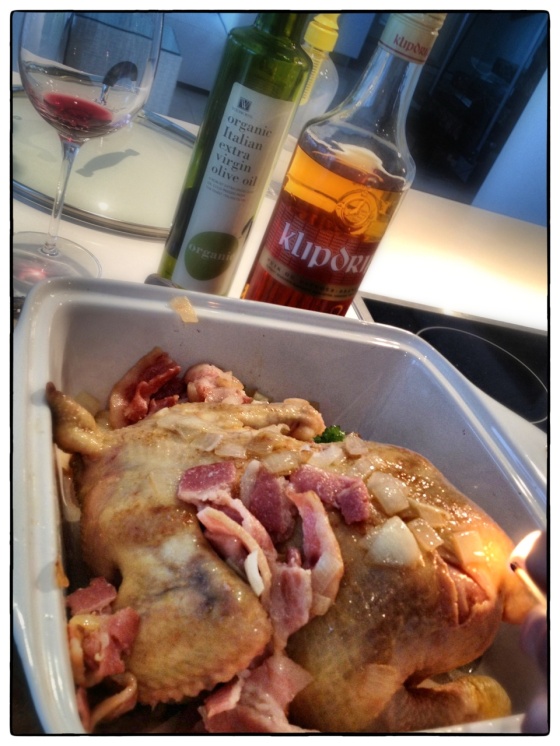 You probably need two people to do the ‘igniting the brandy while pouring it on’ routine. Poking the brandy-splashed chicken with a match doesn’t work. 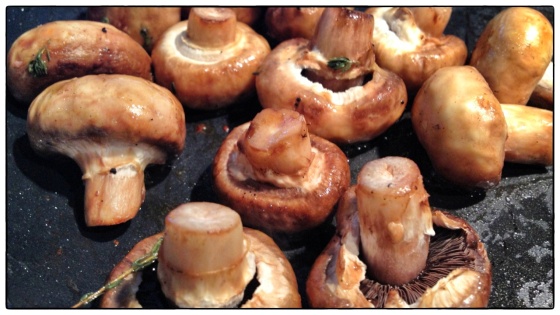 It’s going to take a fair bit of willpower not to just gobble these up. Maybe wait until just before the chicken is ready to fry them.

I was almost stymied until I realised that there is only one wine you can serve with coq au vin, and that is the wine you made it with. That is why, my observant readers, I said you need 2 or 3 bottles of wine, even though the recipe only calls for one.

I did try drinking a very good Bordeaux-style blend, but it simply didn’t work, and I had to recork it. Which is why tonight I am drinking this:

Black Tie. It’s cheap, but you can drink it.

It’s really not as bad as it looks. A friend of mine reckons that some winery had oodles of excess good stuff and just packaged it in these awful-looking bottles so they could sell it off cheap. I don’t think that’s true, but it’s still quite drinkable and exceptional value. And, if you’re making this meal for a boozy dinner party, here’s the really good news: It comes in five-litre boxes too.